Share
The number of internet connections in India has breached a significant milestone of 75 crore as of August 31, 2020, twenty-five years after the service was first thrown open to the public on August 15, 1995. The number of connections more than doubled in the last four years from just 34 crore in March 2016, coinciding with the country’s Digital India programme, which was launched in 2015.

Most of the 75-crore+ connections are in urban areas and availed through wireless devices like mobile phones and dongles. As per the latest information from the Telecom Regulatory Authority of India (TRAI), by the end of June 2020, there were 749 million (74.9 crore) internet connections — narrowband (50.8 million or 5-cr) and broadband (698.2 million or 69.2-cr) together. 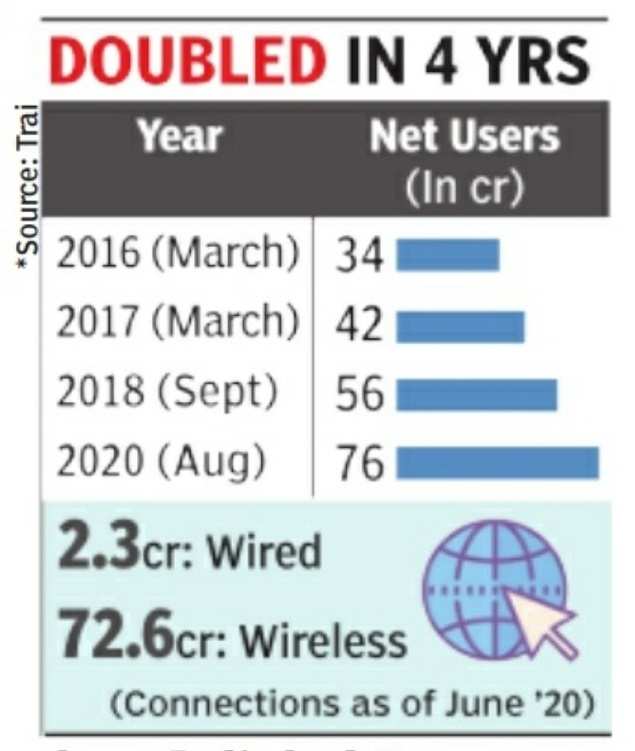 India had breached the 50-crore mark in September 2018 as first reported by TOI, and from there the country has, on average, added more than 86 lakh new connections each month.

While the overall subscriber data is available up to August, the break-ups are available only up to June 30, 2020, going by which, 61% of all connections were in urban areas and 97% of them were wireless. 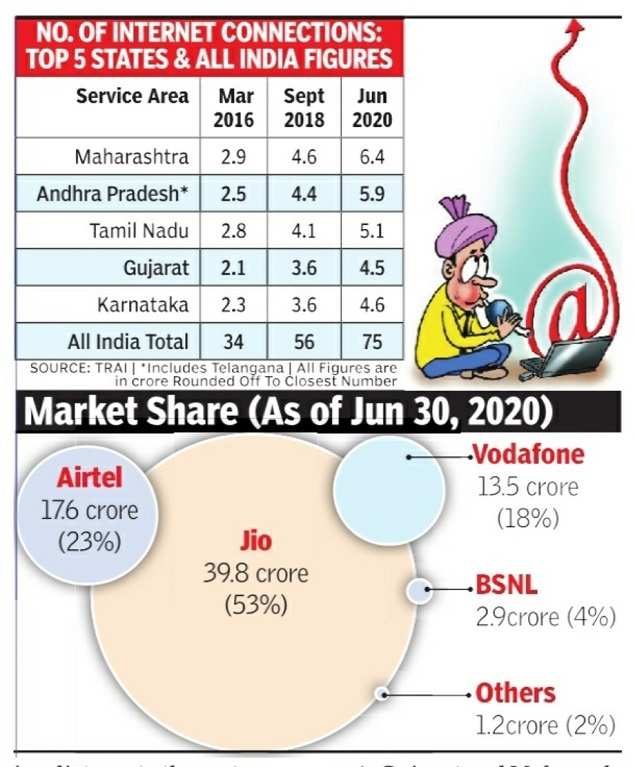 Lt Gen (retd) SP Kochhar, director general, Cellular Operators Association of India (COAI), told TOI: “…While we have 97% of our broadband connections on mobiles, adequate network coverage of the population is still hovering around 50%, which has to increase. There has to be more network rollouts, it must be affordable while quality of service must also be ensured.”

Arguing that the telecom sector has been enabling many other sectors, Kochhar said that the government must support telecom as a foundational sector. “They cannot look at the sector as only a primary revenue generating source (by way of various fees and charges we pay). They have to see the secondary revenue generated because of telecom and support to various verticals in the industry,” he said.

The COAI has proposed to TRAI to introduce a minimum floor price for data on a trial basis, which the latter has said it may put up for an open house discussion. Aside from this, the association has also asked the government to reconsider spectrum charges and revisit some other fees and charges that are levied and are causing financial distress to the sector.

Professor Debabrata Das from the International Institute of Information Technology-Bangalore (IIIT-B), who was an integral part of the Centre’s National Information Infrastructure version 2.0 (NII 2.0), says: “That internet is a game-changer has been reiterated by the pandemic (Covid-19), even amidst which many small businesses managed to work. That aside, access to education, finance and healthcare was enabled by the internet, and I think it won’t be an exaggeration to say it’s now an essential commodity.”

Just five states — Karnataka, Tamil Nadu, Andhra Pradesh (including Telangana), Gujarat and Maharashtra — account for 26 crore or 35% of all internet connections. Separate data shows that as of June 30, 2020, Reliance Jio had the most market share, followed by Airtel and Vodafone.

Also Read: Networks vs. Indies: Who will emerge as winners from the pandemic?

While the total number of internet connections have surpassed 75 crore, it doesn’t mean that the same number of people actually have access to the internet. When India breached the 50-cr mark in 2018, for instance, the subscriber base was only 35 crore while the total connections were 56 crore. This data is not immediately available for this year’s figures, but if one were to assume that the number of subscribers also grew at the same rate, India would have 47.5 crore people accessing these 76 crore connections.